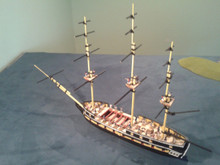 This wooden model kit is a reproduction of the 22-gun British 6th Rate Frigate HMS Cyane. HMS Cyane was a Royal Navy Banterer-class sixth-rate post ship of nominally 22 guns. Cyane had a distinguished career in British service in actions against the Danish, in the Mediterranean and in the east indies. On 20 February 1815, she and HMS Levant engaged the USS Constitution; outgunned, both had to surrender. She then served as the USS Cyane, including a stint on anti-slavery duties, until she was broken up in 1836. This faithful reproduction is for use with 18mm figures.

The ship comes with all the materials to build the hull, masts, and yards.  It includes eighteen cannon and eight carronades.The ship also comes with an alternative stern design typical of French or Spanish Frigate to allow you to build a slightly different looking ship as an opponant.

This is one of our more complex ship kits. We recommend that you start with one of our smaller kits first.

This product hasn't received any reviews yet. Be the first to review this product!